EVERAL of our old churches contain curious stone structures called Easter Sepulchres. They are generally on the north side of the chancel, and resemble, in design, a tomb. Before the Reformation, it was the practice on the evening of Good Friday, to place the Crucifix and Host in these sepulchres with much ceremony. Numerous candles were lighted, and watchers stood by until the dawn of Easter Day. Then, with every sign of devotion, the Crucifix and Host were once more removed to the altar, and the church re-echoed with joyous praise.

Concerning this ceremony, Cranmer says that it was done “In remembrance of Christ’s sepulture, which was prophesied by Esaias to be glorious, and to signify there was buried the pure and undefiled body of Christ, without spot of sin, 112 which was never separated from the Godhead, and, therefore, as David expressed it in the fifteenth Psalm, it could not see corruption, nor death detain or hold Him, but, He should rise again, to our great hope and comfort; and therefore, the church adorns it with lights to express the great joy they have of that glorious triumph over death, the devil, and hell.”

We have adverted to Easter Sepulchres of stone remaining at the present time, but they were by no means the only description erected. The Rev. Mackenzie E. C. Walcott, in his “Sacred Archæology,” names, as follow, five sorts of sepulchres. The first, a chapel, as at Winchester; second, a wall recess, usually in the north side of the chancel, as at Bottesford, Lincolnshire, and Stanton St. John; third, a temporary structure, sumptuously enriched, as at St. Mary, Redcliffe, Bristol; fourth, a tomb, under which a founder, by special privilege, was buried; fifth, a vaulted enclosure, as at Norwich, which, like a sepulchre at Northwold, has an aperture for watching the light, without requiring the person so employed to enter the choir.

There was an imposing example at Seville, raised over the tomb of Columbus. It was 113 constructed of wood, and was three storeys high, and brilliantly lighted. According to an old poet:

“With tapers all the people came, and at the barriers stay,
Where downe upon their knees they fall, and night and
day they pray,
And violets and every kinde of flowers about the grave
They straw, and bring all their giftes and presents that
they have.”

We are told that in many places, the steps of the sepulchre were covered with black cloth. Soldiers in armour, keeping guard, rendered the ceremony impressive. A gentleman named Roger Martin, who lived at the time of the Reformation, wrote an interesting account of the church of Melford, Suffolk. The following particulars are drawn from his manuscript respecting the Easter Sepulchre: “In the quire, there was a fair painted frame of timber, to be set up about Maunday Thursday, with holes for a number of fair tapers to stand in before the sepulchre, and to be lighted in the service time. Sometimes, it was set overthwart the quire, before the high altar, the sepulchre being alwaies placed, and finely garnished, at the north end of high altar, between that and Mr. Clopton’s little chapel there, in a vacant place of the wall, I think upon a tomb 114 of one of his ancestors, the said frame with the tapers was set near to the steps going up to the said altar.” The tomb referred to is that of John Clopton, Esquire, of Kentwell Hall, who filled the office of Sheriff of the county of Suffolk in the year 1451, and died in 1497. An inventory of church goods belonging to Melford Chruch, under date of April 6th, 1541, has a statement to the effect that “There was given to the church of Melford, two stained cloths, whereof the one hangeth towards Mr. Martin’s ile, and the other to be used about the sepulchre at Easter time.”

In a curious work entitled “The Ancient Rites and Monuments of the Monastical and Cathedral Church of Durham,” collected from out of ancient manuscripts about the time of the suppression, and published by J. D. (Davies), of Kidwelly, in 1672, there is an interesting account of a custom enacted at Durham. The following account is supposed to have been written in 1593, and, perhaps, by one who took part in the ceremonies, at all events, the writer was conversant with them. “Within the Church of Durham, upon Good Friday, there was a marvellous solemn service, in which service time, after the Passion was sung, two of the ancient monks took a goodly large 115 crucifix, all of gold, of the picture of our Saviour Christ, nayled upon the cross. . . . The service being ended, the said two monks carried the cross to the sepulchre with great reverence, which sepulchre was set up in the morning on the north side of the quire, nigh the high altar, before the service time, and they did lay it within the said sepulchre with great devotion, with another picture of our Saviour Christ, in whose Breast they did enclose, with great reverence, the most holy and blessed Sacrament of the Altar, censing and praying unto it upon their knees, a great space; and setting two lighted tapers before it, which did burn till Easter Day in the morning, at which time it was taken forth. . . . There was very solemn service betwixt three and four of the clock in the morning, in honour of the Resurrection, where two of the eldest monks in the quire came to the sepulchre, set up upon Good Fryday, after the Passion, all covered with red velvet embroider’d with gold, and did then cense it, either of the monks with a pair of silver censers, sitting on their knees before the sepulchre. Then they, both rising, came to the sepulchre, out of which, with great reverence, they took a marvellous beautiful image of our Saviour, representing 116 the Resurrection, with a cross in his hand, on the breast was enclosed, in most bright chrystal, the holy Sacrament of the Altar, through which chrystal, the Blessed Host was conspicuous to the beholders. Then, after the elevation of the said picture, carried by the said two monks, upon a fair velvet cushion, all embroider’d, singing the anthems of Christus Resurgens, they brought it to the high alter.” We gather from the preceding and other accounts, that the sepulchre at Durham was a temporary erection, consisting of a wooden framework, having silk hangings.

As might be expected, much interesting information may be found in old churchwardens’ accounts bearing on this theme. The records of St. Mary Redcliffe Church, Bristol, contain the following entries:

Item — An image of God Almighty rising out of 117 of the same sepulchre, with all the ordinance that longeth thereto; that is to say, a lathe made of timber, and the ironwork thereto.

Item — Thereto longeth Heaven, made of timber and stayned clothes. 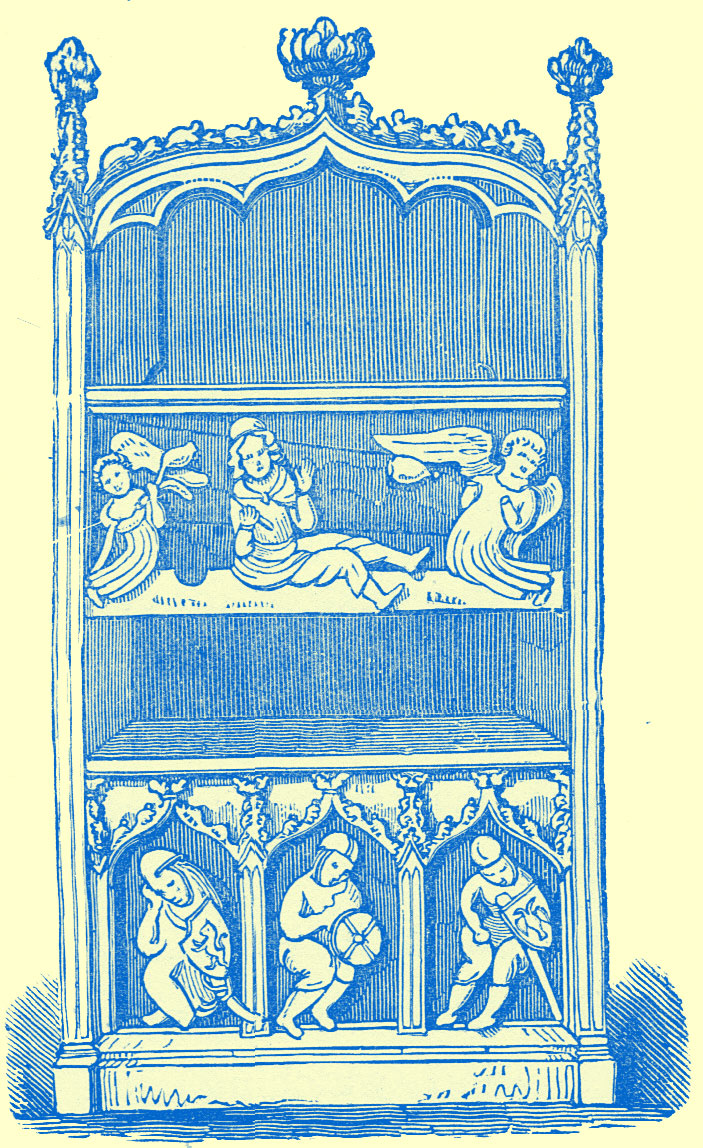 Item — Hell, made of timber, and the ironwork thereto, with Divels to the number of 13.

Item — 4 payr of Angels wings for 4 Angels, made of timber, and well painted.

Item — The Fadre [i.e., the Father], the Crowne and Visage, the ball with a cross upon it, well gilt with fine gould.

Item — The Holy Ghost coming out of Heaven into the sepulchre.

Item — Longeth to the 4 Angels 4 Chevelures.”

We cull from the accounts of St. Helen’s, Abingdon, Berkshire, some quaint items as follows:

In this case, of course, the sepulchre was merely a temporary erection. In the churchwardens’ accounts of Waltham Abbey Church are the following entries:

Amongst the churches of this country where permanent Easter Sepulchres still remain, are the following: Heckington, Navenby, Northwold, Holcombe, Burnell, Southpool, Hawton, and Patrington. We give an illustration of the interesting example at Patrington, East Yorkshire. Mr. Bloxham speaks of it as probably the work of the earlier years of the fifteenth century. The carvings are of freestone, and represent the watching of three soldiers, beneath three ogee-shaped canopies. On their shields are heraldic designs. The other figures represent our Saviour, emerging from the tomb, and two angels are raising the lid of the coffin. This is certainly a very interesting example, but perhaps not so fine as those of Navenby and Heckington, Lincolnshire.