From The Windflowers of Asklepiades and The Poems of Poseidippos, translated by Edward Storer; from The Poet’s Translation Series, Second Set, No. 5; London: The Egoist Press, 1920; pp. 18-28.

[Translated by EDWARD A. STORER]

POSEIDIPPOS lived a little later than Asklepiades. He was writing about 250 B.C., as we know from his epigram on Arsinoe, the sister and queen of Ptolemy, who died 247 B.C. Poseidippos was an Alexandrine and an epigrammatist of the same school as Asklepiades, with whose epigrams his own have sometimes been confounded. Athenæus mentions two epic poems by Poseidippos, Aethopia and Asopia. Both, unfortunately, have been lost.

TO A WINE VESSEL

DRIP, Attic flagon, the rich dew of Bakkhos, sprinkle your moisture over the common feast. Be silent, Zeno, swan of wisdom, and the muse of Kleanthes. Let us turn our thoughts to bitter-sweet love.

Do not think I am deceived by these persuasive tears, Philanion. I understand. You love no one better than me when we are together, but if another has you, you tell him you love him best.

Tears and laughter: why, before I have rescued my feet from one of Kypris’ furnaces, do you drive me to another?

Never do I find respite from love, but Desire, careless of my sufferings, is always seeking to add to it.

If she has anyone with her, Pythias, I shall go away. But if she is really alone, then, by Zeus, call me in for a little while.

And tell her for a sign of me that drunken and in the night I come, driven on by impudent bold love.

We are four revellers here, and a companion is coming for each. One flagon of Khian will not be enough for the eight of us.

Boy, go over to Aristios and tell him to send at once another half-flagon. Even that will leave us two khoes short. All the same, it will have to do. But run; we meet at the fifth hour.

The three-year-old child Arkheanaktis playing by a well was lured therein by his own mute image.

His mother drew him out all dripping wet from the water, seeking anxiously for any relic of life in him.

The child did not defile the spring of the nymphs, but hushed upon his mother’s knees, began his long sleep.

THE GRAVE OF THE SHIPWRECKED

Sailors, why do you bury me so close to the sea? Better to fill in the wretched grave of the shipwrecked man further away. I shudder at the sound of the waves which were my death.

But even so, whomsoever takes pity on Niketis — hail!

THE ARROWS OF THE LOVES

Strike me, strike me, Loves! I am but one victim among many. Do not spare me, witless ones, for if you conquer me, you will be mighty bowmen among the immortals, as powerful as the great arrow-bearer himself.

DESIRE AND THE CICALA

Love wishing to silence the cicala of the Muses in the acanthus bush set fire to its wings.

My mind intent upon books cares for nothing else, and spurns the suggestions of the god.

How shall a man live? In the Agora are quarrels and hard dealings. At home, cares. In the fields, plenty of toil. At sea, terror. In a foreign land should you be rich, you will have no security; and if you are poor, you will be miserable.

Have you a wife? You will not be without difficulties. Unmarried? You are a lonely man.

Children are a grief, but the childless life is a crippled one. The young are thoughtless, but the old are weak.

In the end, your choice is then of two things: never to be born, or as soon as you are born to die.

ON A BRONZE ALEXANDER

O Lysippos, Sikyonia’s sculptor, master-hand, craftsman of great skill, the bronze which you have modelled for this statue of Alexander seems on fire. The Persians will be blamed no more. One can forgive the cattle who run from the lion.

Dorikha, your bones are long since dust, and dust the fillet that bound your hair, and the perfume-breathing robe you folded about lovely Kharaxos when, in his arms, you sipped the wine at dawn.

But the white leaves of Sappho’s precious ode remain, and will remain, speaking your adorable name which Naukratis shall never forget so long as a sea-going ship shall come to the waters of the Nile.

Dweller in Kypris and Kythera and Miletos and the fair land of horse-trampled Syria, come graciously to Kallistion, who never sent a lover away from her door.

ON A FIGURE OF LUCK

From what country is the sculptor? From Sikyonia. His name? Lysippos. And who are you? Luck, that rules everything. Why do you stand on tiptoe? I am always running. Why have your feet twin wings? I fly on the wind. Why have you a razor in your right hand? That men may know me sharper than the keenest blade. And why this hair over your forehead? That he who meets me may take hold of me. But, by Zeus, why are you bald behind? That no-one I have passed by on my winged feet may seize me at his fancy from behind.

Why has the artist fashioned you so? For your sake, stranger, he made me and set me up as a warning in this porch.


Dr. Amy C. Smith, a Classical Art historian, says that this describes the famous work known as Kairos, which is better translated as Opportunity, or Chance.

An excellent picture of this relief by Lysippos can be found here, bald spot and all, on this blog. — Elf.Ed.

The much misunderstood Machiavelli wrote a poem on a goddess with the same qualities that can be read on this site. It is in both Italian and in English, translated by Lorna de’ Lucchi: “Opportunity.” — Elf.Ed.

THE FIGURE OF AN ATHLETE

Once for a wager I ate a Meonian ox, for my own country Thasos did not offer me good fare.

I am Theagenes. Having eaten, I asked for more.

Wherefore, I stand in this fashion with outstretched hand.

This stone of dazzling purity was not found in a river surging over its banks, but in the head of a full-bearded dragon.

The sculptured chariot figured on it was graven by a man with eyes like a lynx, for you can see the design without noticing the relief in the surface. It is a great miracle of labour, and one wonders how the lapidary did not lose his sight over so close a task.

If you had wings of gold, and there hung from your shoulders a quiver full of arrows, and you stood near the splendour-loving Eros, by Hermes, I swear that Kypris herself would not know which was her son.

The Loves themselves coming from Kypris’ golden halls have seen the tender Eirenion, a sacred flower from her hair to her feet, a statue of carved white marble, weighed down with virginal graces.

And many arrows leaping from the purple bows of the Loves pierced the hearts of the young men.

Pyromakhos, the glutton who used to devour everything like a bird of the night, lies in this broken ditch; his shroud the relics of a Pellenidean cloak.

Yet anoint his stele, Attikos, and lay a garland there if ever he was with you in the July feasts.

He came from the revels of the wine god, with dulled eyes, toothless, and with no hair on his head, having only his oil bottle and dressed in the actor’s cape.

So it was he passed from Linnaeos to Kalliope.*


*  The point lies in a play on words — Kalliopen, and Kalenopen, fine ditch.

AN ARGUMENT AGAINST LOVE

I am well armed and will contend with you, not yielding more than a mortal must. But come near me no more, Love.

If you should seize me though when I am drunk, you will capture only my folly.

When I am sober, I have an ordered argument against you.

NAMES IN THE WINE

Fill me two cups of wine for Nannos and Lydia, and one for Mimnermos the friend of lovers, and one for the wise Antimakhos. A fifth I will drink to myself, and a sixth, Heliodoros, for whomsoever you say you love. A seventh for Hesiod, and for Homer an eight. The ninths shall be for the Muses; the tenth for Memosynes.

A cup full to the brim I drink to you, Kypris, and other toasts I could give — never a difficult matter for a drunkard.

Kleander saw Niko floating in the blue sea by your shores, O Paphian Kythera, and a burning flame filled the youth’s heart for the fair swimmer.

He lay like a shipwrecked man on the beach, while she, borne up by the waves, gained the smooth sand.

But now they are happy in a love which they share, and the vows they made by the sea endure still.

Mighty Proteos, here, by the shore of Pharos, Sostratos of Dexiphanos the Knidian raised a light-house for the safety of the Greeks, were before there was no lookout among the islands.

But now your great pile draws the ships to your shores, where the beacon rears its head above the clouds, so that at night the pilot, seeing the light flash over the waves and the fire burning brightly on the summit, will be able safely to steer his ship to royal Proteos, and, ploughing our sea, to come securely to the harbour of Tauros.

Here, between the shores of Pharos and the high waves, and the mouth of Canopos, this monument turns away from Libya, fruitful in flocks, to meet the west winds from Italy.

Kallikrates erected me here, and consecrated me to Queen Arsinœ Aphrodite.

Chaste daughters of the Greeks, and you mariners of the sea, turn to Aphrodite of the favouring winds who will hear your prayers.

To give you good refuge from the angry Pelagian was this temple raised.

Printed at the Pelican Press, a Carmelite Street, E.C.4 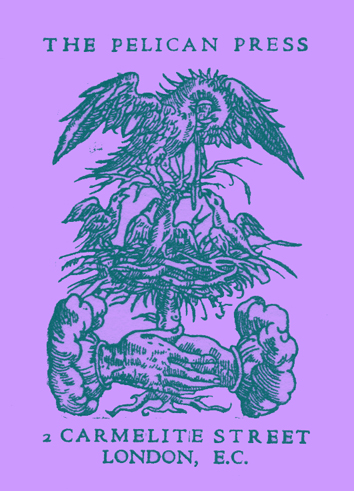