[Click on the footnote symbols and you will jump to the note on the bottom on the page. Then click on the symbol there and you will be magically transported back to where you were in the text.]

TO the lover of Shakespeare, the name of Glammis (as it was sometimes spelt) will recall the act of treachery and murder which tradition gives as having taken place there, when King Duncan was done to death by the hand or at the instigation of the ambitious and unscrupulous Lady Macbeth; although there is no possibility of proving or testing the truth as to the details or locality of the tragedy. 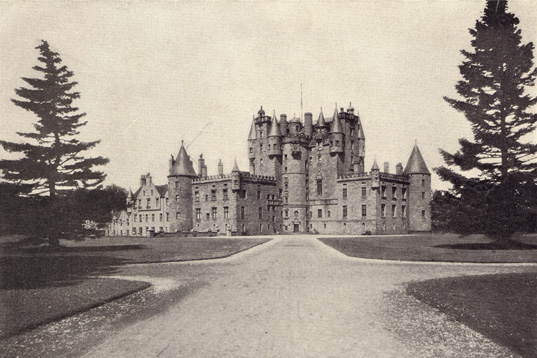 To the antiquarian, the Castle must be of immense interest on account of the great age of the central portion, or keep, which is known to have been standing in 1016, but “whose birth tradition notes not”; while to the romantic and superstitious it is associated as a place where ghosts and spirits moving silently down winding stairs and dark passages are wont to make night fearsome. This feeling of eeriness is not confined to the naturally nervous, for Sir Walter Scott, who spent a night at Glamis in 1794, writes:

“After a very hospitable reception, . . . I was conducted to my apartment in a distant part of the building. I must own that when I heard door after door shut, after my conductor had retired, I began to consider myself too far from the living and somewhat too near the dead.”

Additional interest attaches to this castle from the fact that its venerable walls enshroud a mysterious something, which has for centuries baffled the curiosity and investigations of all unauthorized persons; this secret is known only to three people — the Earl of the time being, his eldest son, and one other individual, whom they think worthy of their confidence.

Most people have theories upon this subject, and many ridiculous stories are told; but so carefully has the mystery been guarded, that no suspicion of the truth has ever come to light. One version of the story is as follows: Several centuries ago the Lord Glamis of the time was entertaining the head of another noble family then resident in Angus; and in the course of the evening they commenced to play cards. It was Saturday night, and so intent were they on wagering lands and money on the issue of the game, that they did not recognize the fact that Sunday morning was approaching until an old retainer ventured to remind them of the hour. Whereupon one of the gamblers swore a great oath, with the tacit approval of the other, that they did not care what day it might be, but they would finish their game at any cost, even if they went on playing till Doomsday! It had struck midnight ere he had finished his sentence, when there suddenly appeared a stranger dressed in black, who politely informed their lordships that he would take them at their word, and vanished.

The story goes on to aver that annually on that night three noblemen, or their spirits, meet and play cards in the 316 secret room of the Castle, and that this will go on till Doomsday. In corroboration of this story, it is said that on a certain night in the autumn of every year, loud noises are heard, and some of the casements of the Castle are blown open.

Glamis Castle stands in the centre of the vale of Strathmore, in a picturesque and well-wooded part of Forfarshire; the heather-clad sides of the Sidlaws, which divide Strathmore from the sea, rising to the south, while away to the north tower the Grampians, which form a magnificent background to the ancient pile of buildings, whose turrets rise some hundred and fifteen feet above the level of the ground.

The poet, Gray, in a letter, describes the exterior of the castle in the following words:

“The house, from the height of it, the greatness of its mass, the many towers atop, and the spread of its wings, has really a very singular and striking appearance, like nothing I ever saw.”

The oldest portions of the Castle are formed of huge irregular blocks of old red sandstone, which time and weather have mellowed into a beautiful grey, pink colour. The walls in many places are sixteen feet thick, which in the olden days had the essential recommendation of great security, and also of allowing space for secret rooms and passages as means of escape in times of peril; and as a matter of fact, two secret staircases have been discovered within the last five-and-twenty years, and possibly there are others which still remain forgotten and unused.

The narrow windows appear at irregular heights and distances in the central building or keep and left wing (the right wing having been burnt down and rebuilt early in 1800, is not so interesting), but the great staircase added by Patrick, Lord Glamis, in 1605, is very fine, occupying a circular tower, the space for which has been partly dug out of the old walls of the keep, and rises to the third story. This staircase (the designing for which has been attributed to Inigo Jones) is spiral, with a hollow newel in the centre, and is composed of stone to the summit. It consists of 143 steps, 6 feet 10 inches in width, each of one stone.

The staircases, which were in use before 1600, are very narrow, dark, and some of them winding, the steps steep and irregular in height, worn into hollows by the many feet that for centuries climbed them. Up two flights of these dimly lit, uneven stairs, the wounded king, Malcolm II., after having been treacherously attacked and mortally wounded by Kenneth V. and his adherents on the Hunter’s Hill, about a mile from the Castle, was carried by his followers to die in the chamber that still bears the name of King Malcolm’s room. This murder of King Malcolm is the first authentic event mentioned by the chroniclers in connection with Glamis.

In the time of King Malcolm, Glamis was a royal residence, and remained so till 1372, when Sir John Lyon, “a young man of very good parts and qualities, and of a very graceful and comely person, and a great favourite of the king” (Robert II.), was made Lord High Chamberlain of 318 Scotland. At that time the king’s daughter, the Princess Jean, fell in love with this young knight, and was given him in marriage together with the lands of the thanedom of Glamis, “pro laudabili et fideli servitio et continuis laboribus,” as the charter bears witness, March 18, 1372. Ten years later Sir John fell in a duel with Sir James Lindsay of Crawford, and was buried at Scone among the kings of Scotland. He left one son, from whom the present family of Lyon have descended without a break from father to son to the present day. Fifty years later, Sir Patrick Lyon (Sir John’s grandson), who was one of the hostages to the English for the ransom of James I. from 1424 to 1427, was created Baron Glamis, and appointed Master of the Household to the King of Scotland. For the next hundred years nothing of interest occurred till John, sixth Lord Glamis, married the beautiful Janet Douglas, granddaughter of the great Earl of Angus (Bell-the-Cat), and died in 1528. Lady Glamis married, secondly, Archibald Campbell, of Kepneith, whose relative, another Campbell, fell in love with her. Finding, however, that his addresses were but ill received by this lady, who was as good as she was lovely, his love turned to hate, and he revenged himself by informing the authorities that Lady Glamis, her son, Lord Glamis, and John Lyon, his relative, were conspiring against the life of the king, James V., by poison or witchcraft. They were tried for high treason and wrongfully convicted! Lady Glamis and her young son were both sentenced to be burned, and the estate of Glamis was forfeited and annexed to the Crown by Act of Parliament, December 3d, 1540.

However, those brutal judges, on account of the extreme youth of Lord Glamis, feared to bring him to execution, so the boy was kept in prison, with the death sentence hanging over him, while the beautiful Lady Glamis was dragged forth and burned at the stake on the Castle Hill of Edinburgh, July 17th, 1537. Those were days when acts of violence and cruelty were regarded with an indifference that we cannot now realize, although when she stood up in her beauty to undergo this fearful sentence, it is recorded that all heads were bowed in sorrowful sympathy. When this infamous execution was accomplished, remorse seems to have come over Campbell, who was visited by visions of his victim looking at him with sad, reproachful eyes. When, some years later, his death was drawing nigh, he confessed that his evidence at the trial was altogether false. Lord Glamis was therefore released from prison, and his estates and honours restored.

To return to the Castle. The exterior is much ornamented with ancient armorial bearings in carved stone, while a round niche over the front door contains a bust of Earl Patrick. The principal entrance is a striking feature. The doorway is small and low, and a stout iron-clenched oaken door, thickly studded with nails, is guarded on the inside by a heavily grated iron gate, which opens right on to the staircase. A flight of steps to the right of the entrance leads down to the dungeons, vaults, and the old well (now filled up) which supplied the inmates with water in times of siege; while another stair to the left leads up to the Retainers’ Hall (or Crypt as it is now called), low, and fifty 320 feet in length, with walls and arched roof entirely composed of stone. Of the seven windows, which are small, four or five are cut out of the thickness of the walls, and make recesses just large enough to form small rooms, which might have been used as sleeping chambers in old days. Lay figures, clad in complete armour, stand in the recesses, which, especially in the dusk, give an eerie effect to this part of the Castle. It is said that a ghostly man in armour walks this floor at night — possibly the original of one of those armoured figures standing silently in the crypt year after year, who may, perchance, have ended his life in the dungeon that lies exactly underneath.