From Lucian’s Wonderland, being a Translation of the ‘Vera Historia,’ by St J. Basil Wynne Willson, M. A., illustrated by A. Payne Garnett; Edinburgh and London: Blackwood and Sons; 1899, pp. 118-135.

DEPARTURE FROM THE ISLAND OF THE BLEST — THE PLACE OF THE DAMNED — ITS HORRORS AND TORMENTS — THE ISLAND OF DREAMS — OGYGIA — ULYSSES’ LETTER TO CALYPSO.

REMAINED there that day, and on the next put out to sea escorted by the Heroes. On the way Ulysses comes privily to me without the knowledge of Penelope and gives me a letter to convey to Calypso1 in the island of Ogygia.

Rhadamanthus sent with me Nauplius, the pilot, to prevent our being arrested in the event of our landing on any of the islands, THE
ISLAND
OF
TORMENT.119 seeing that we were sailing to another destination.

As we proceeded on our way we passed out of the fragrant air, and were immediately assailed by a terrible stench as of bitumen, sulphur, and pitch being burnt together, and also by a vile unendurable steam which seemed to arise from roasted human bodies. The air was murky and misty, and from it fell drops of pitchy dew. Moreover, we could hear the cracking of whips and the cries of many men.

We only put into one island, of which I will give some description.

On all sides it was craggy and precipitous, covered with rocks and rugged tracts. There were not trees or water.

We managed to crawl up the rocks, and followed a path full of thorns and stakes through hideous country.

Arriving at the prison and place of torment, we were at first lost in wonder at the nature of the spot. For everywhere the ground itself bristled with swords and stakes, and round it flowed three rivers — one of mud, another of blood, and a third of fire, which was broad and impassable. The flames flowed like water and rolled like the billows of the sea. Therein were fish, some like firebrands, and others of small size like burnt cinders. The inhabitants call them lychnisci, or “lamp-rays.”

Through all these defences there was one narrow entrance, where Timon of Athens stood as doorkeeper. However, we were permitted to pass under the guidance of Nauplius, and beheld the sufferers in torment. Many were kings, many private persons, amongst whom we recognised some friends. Cinyras


123
THE
PUNISHMENT
OF
LIARS.we saw there smouldering in smoke. Our guides gave us details of the history of each, and of the crimes which brought upon them this punishment.

The greatest retribution came upon those who throughout life told lies and chronicled what was not the truth. Amongst them was Ctesias of Cnidos,2 Herodotus, and many others. When I saw these, I had good hopes of the future, for I have no guilty consciousness of having ever told an untruth.

Unable to endure the horrible sight, I quickly returned to the ship, and bidding Nauplius farewell, sailed away. In a short time the Island of Dreams appeared lose by, shadowy and indistinct, and itself not unlike a dream, for as we approached it, it retreated and fled farther away. Yet we reached it, or rather overtook it, and entered the Harbour 124 of Sleep near the Ivory Gates, where is the shrine of the Cock. It was late in the evening when we landed. Passing on into the city, we saw many dreams of various descriptions.

However, first of all I propose to say a few words about the city, as no one else has written on the subject. Homer, the only poet who mentions it, has not given at all an accurate description.

Round it runs a wood of which the trees are all tall poppies and deadly-nightshade, to whose branches cling a host of bats, which is the only kind of bird in the island. Near it flows a river called by the folk there Nyctiporus, or Nightford; and there are two fountains at the gates, — the name of the one is Deepsleep, and of the other Nightlong.

The walls that surround the city are lofty, 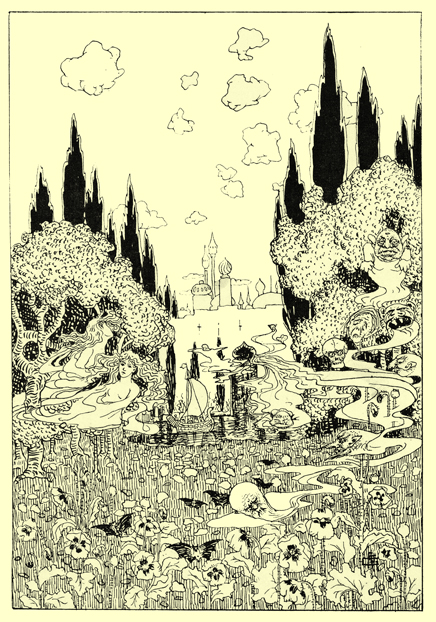 
127
THE
PALACE OF
SLEEP. and many-hued like the rainbow. Its gates are not, as Homer says, two in number, but four.3 Two look towards the Plain of Idleness — one of iron and the other of brick: through these pass all the fearsome, cruel, bloody dreams. Two more face the harbour and the sea — the one of horn, the other, by which we entered, of ivory.

As you enter the city, on the right-hand side is the Temple of Night, who with the Cock is the chief object of reverence there. The temple of the latter is near the harbour. On the left is the Palace of Sleep, who rules over the country with the help of two governors or viceroys, Troublewit, son of Vainhope, and Purseproud, son of Emptyshow. In the middle of the market-place is a fountain which the people call Heavy Slumber. Hard by are the two temples of Delusion and 128 Reality. There, too, is the shrine and oracle at which presides Antiphon, the interpreter of dreams, who had obtained this office from King Sleep.

The Dreams themselves have not all the same nature or form, some being tall, fair, and beautiful to look upon, whilst others are hard, small, and unsightly. Some seemed golden, and others mean and shabby. Some were winged and of prodigious size, whereas others were tricked out for solemn processions, personating gods or kings and suchlike. Many of them we recognised as having appeared to us long ago, who approached us and greeted us as familiar friends. They took us, and after lulling us to sleep, treated us with hospitality that was a dream of splendour. The whole of the entertainment was magnificent, and they promised to make us 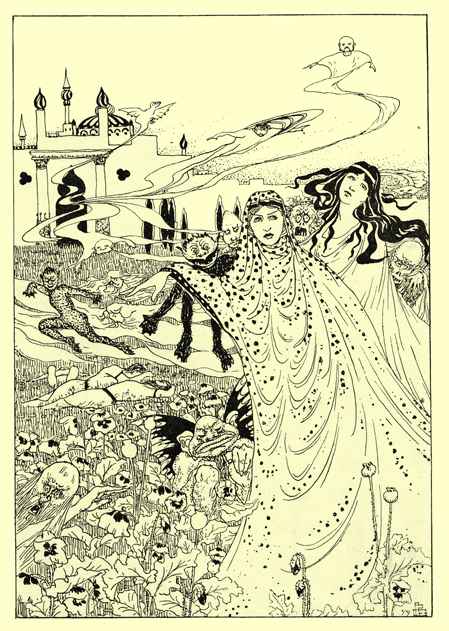 
131
A LETTER
FROM
ULYSSES.kings and governors. Some also took us away to their own country, showed us their friends, and brought us back the same day.

For thirty days and nights we remained amongst them sleeping and feasting. Then suddenly a violent thunder-storm burst upon the island, whereupon we waked from sleep, leapt up, and having taken on board provisions, put out to sea.

Three days after we put into the island of Ogygia and disembarked. Before delivering Ulysses’ letter, I opened it and read the contents. It ran as follows: —


“You must know that when I first sailed away from you on a raft that I had made, I suffered shipwreck and was with difficulty brought safe by Leucothea to the island of the Phæacians, who sped me on my way to 132 my own country, where I found many suitors of my wife luxuriously revelling in my halls. I slew all of them, but was subsequently myself killed by Telegonus, my son by Circe.4 Now I am in the Island of the Blest, thoroughly repentant of quitting my life with you and the immortality that you offered me. If I find an opportunity, I shall run away and fly to you.”

The letter went on to introduce us in order that we might be hospitably entertained.

So proceeding a little way from the ship, I found the cave to correspond to Homer’s description, and Calypso herself engaged in spinning.

On receiving the letter and perusing it, she at first shed many tears, and then invited us to a banquet and entertained us sumptuously. Many were the questions she asked 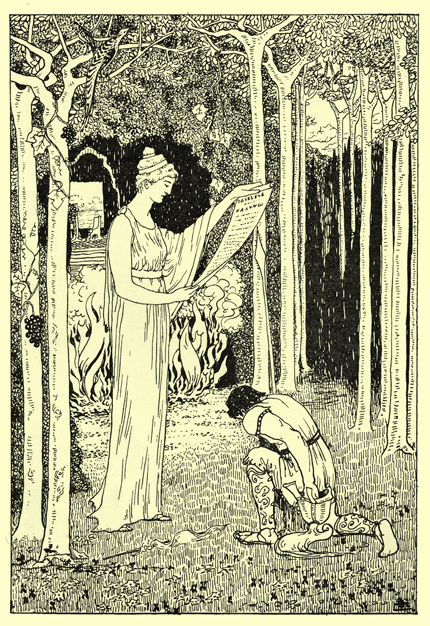 
135
CALYPSO’S
CURIOSITY. about Ulysses and Penelope — what she was like to look upon, and was she as prudent as Ulysses in the olden days used boastfully to describe her? To all these inquiries we gave her such answers as we thought would please her. Then we departed to the ship and lay down close by on the sea-shore. 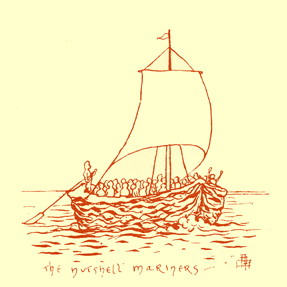 1  Calypso, a nymph who lived on the island of Ogygia, where Ulysses in his wanderings was shipwrecked. She fell in love with the hero, and promised him immortality on condition that he would remain with her and not return to his wife Penelope. Ulysses refused, whereupon Calypso detained him in the island for seven years, until compelled by the gods to release him.

3  Homer said there were two gates, one for truthful, the other for lying dreams. Virgil recognises two gates — one of horn, for verœe umbrœ, i.e., true spirits appearing in sleep, and the other of ivory, for delusive dreams.

4  Telegonus was sent out by Circe to seek for his father. Being shipwrecked on the island of Ithaca and pressed by hunger, he began to ravage the fields. Thereupon Ulysses marched against him, and was killed by his son, neither knowing the other.