From Lucian’s Wonderland, being a Translation of the ‘Vera Historia,’ by St J. Basil Wynne Willson, M. A., illustrated by A. Payne Garnett; Edinburgh and London: Blackwood and Sons; 1899, pp. 136-156.

OTHER STRANGE MONSTERS — A WONDERFUL BIRD’S NEST — AN OCEAN FOREST — COMBAT WITH THE OX-HEAD ISLANDERS — ADVENTURES AMONG THE DONKEY-LEGGED WOMEN.

BOUT dawn we put out to sea with the wind blowing very strongly. After being tempest-tossed for two days, on the third we encountered the Pumpkin-Pirates, wild savage men who sail out from the neighbouring islands and plunder passing ships. Their vessels are prodigious pumpkins, sixty feet in length. When the pumpkin is dried, they hollow it PIRATES
AND
MARINERS.137 out, remove the pulp, and fit up the interior with reeds for masts and the leaves of the vegetable for sailcloth. They attacked us with the crews of two vessels and wounded many of us with pumpkin-seeds, which they use in place of stones.

After fighting for some time without any considerable advantage to either side, about noon we saw the Nutshell-Mariners sailing up in the rear of the Pumpkin-Pirates. Now these two peoples were bitter enemies, as they soon made clear. For when our assailants perceived their foes approaching, they quitted us and turned to attack them. We in the meanwhile hoisted our sail and fled, leaving them to their fight. It was evident that the Nutshell-Mariners would be victorious owing to their superior numbers, for they had five fully manned ships, which were also of stouter 138 build than those of their opponents, being constructed of the halves of empty nutshells, each of which was ninety feet in length.

As soon as we were out of sight we looked to our wounded, and from that time we generally remained under arms in constant expectation of attacks. Nor was our precaution vain; for the sun had not yet set when from a desert island about twenty men attacked us riding on huge dolphins. They were also pirates. When they were quite close, they stationed themselves at intervals here and there and discharged dry cuttlefish and crabs’ eyes at us. However, they could not stand against the showers of arrows and javelins that we poured upon them, and the majority of them fled wounded to the island.

About midnight in a calm we ran unawares upon a vast Halcyon’s nest, seven miles in


141
THE
HALCYON’S
EGG.circumference. The Halcyon herself, who was sailing on it hatching her eggs, was almost of the same size. When she rose, she nearly sank the ship with the wind caused by her wings. As she flew away, she uttered a weird groaning noise. At dawn we went on shore and surveyed the nest, which resembled a great raft made of leaves. On it were five hundred eggs, each larger than a cask of Chian wine. We could see the young inside and hear them croaking. By way of hatching one of these callow fledgelings we cut open one of the eggs, with our axes, and out it came, larger than twenty vultures.

We put off and had sailed about five-and-twenty miles from the raft when some marvellous portents of much significance occurred. The figurehead of the goose at the prow suddenly flapped its wings and hissed. Scintharus, 142 our pilot, though he had long been bald, found his hair grown again. But the strangest thing of all was that the mast of the ship sprouted and produced branches and bore fruit on the mast-head, consisting of figs and large unripe grapes.

At the sight of these prodigies we were, as can be imagined, dumbfounded, and prayed to the gods to avert the evil significance of the manifestation.

We had not proceeded sixty miles when we beheld a vast thick wood of pines and cypress-trees. We supposed it to be mainland, but it was in reality an unfathomable sea planted with rootless trees, which, nevertheless, stood firm and upright, and, as it were, floating. When we drew close and surveyed the whole we were at a loss that to do; for we could not sail through the wood, as it was of a thick SAILING
ON THE
TREE-TOPS.143 dense growth, nor did it seem easy to turn back. So I climbed up the tallest tree and took a survey of the lie of the country beyond, and saw that the wood extended five or six miles, and that then beyond it another ocean awaited us. At length I decided to haul the ship up on to the spreading foliage, which was very thick, and thus, if possible, get it across to the farther sea. We managed to do it as follows: we hoisted the vessel up to the top of the boughs and spread the sails and went merrily along our way as if on the sea, gliding slowly with a gentle breeze behind us. Then there occurred to my mind the verse of the poet Antimachus in which he says —

“And they came sailing on their silvan voyage.”

Having thus forced our way across the forest, we reached the water, and hauling the vessel 144 down in a similar way we continued our voyage through pure clear water, until we came upon a mighty chasm formed by a separation of the sea, like the clefts we see often in land caused by earthquakes. We quickly hauled down the sails, but the ship was not easily brought to a standstill, and we were within an ace of being swallowed up in the abyss. Peering over the side, we beheld a depth of six hundred thousand feet. We marvelled and shuddered; for the water stood up like two walls, as if it had been cut in two. But looking round to the right, we espied a bridge formed of water, which, as far as we could see, joined the two masses of water, flowing across from the one to the other. We rowed quickly to it, and crossed it with all possible speed, although we never hoped to accomplish the passage in safety.

THE
OX-HEADS.On the farther side a calm sea awaited us and a small inhabited island easy of access, peopled by ox-headed savages who recalled the representation of the Minotaur in paintings.1 We disembarked and went on shore to take in water and provisions if possible — for we had exhausted our store of both. Water we found close at hand on the spot, but nothing else: only we heard at no great distance a loud bellowing. Thinking that it proceeded from a herd of cattle, we advanced a little way inland and came upon the inhabitants, who, as soon as they saw us, gave chase and captured three of the crew. The rest of us fled to the shore. There we armed ourselves, resolving not to let our comrades go unavenged, and fell upon the Ox-Heads as they were in the act of dividing the flesh of the prisoners whom they had taken. With a 146 loud shout we set upon them, killing at least fifty and capturing two alive, with whom we returned to the ship.

As we found no food, my companions urged me to kill the prisoners; but I could not approve the plan, and kept them in chains until envoys arrived from the enemy demanding back the prisoners on ransom. We were able to understand their meaning by their signs and mournful bellowings as plainly as if they had spoken with human voice. The ransom consisted of several cheeses, dried fish, onions, and four deer, each of which had three feet, two behind and one in front. On these terms we restored the prisoners, and having waited a day, put out to sea.

And now fish were visible and birds flew past us, and other signs appeared indicating HUMAN
SHIPS.147 the proximity of land. Shortly we saw men also practising a strange kind of seamanship; for they themselves were at the same time both ship and sailor. Their method is this: they lay themselves flat on their back in the water, hoist a mast in their middle to which they attach a sail, and holding the lower part of the rope in their hands, are blown along by the wind.

Following them came others sitting on corks to which were yoked a pair of dolphins, which they drove and guided with reins. The dolphins approached us dragging the corks. These strange folk neither attacked us nor fled from us, but rode fearlessly and peaceably round, admiring the shape of our vessel and examining it on all sides. In the evening we put in to a small island, inhabited 148 by women, as we thought, speaking the Greek tongue. For they approached us with words of welcome on their lips, dressed in long trailing robes right down to their feet. The island was called Cabalusa and the city Hydamardia. These ladies each took one of us as her special guest and entertained him. For myself I waited a little, for I augured no good, and looking carefully round discovered the bones and skulls of men scattered about. My first impulse was to raise a shout, summon my comrades, and have recourse to arms; but on second thoughts I decided against this plan, and stretching out the mallow that Rhadamanthus had given me, I prayed earnestly for escape from our present dangers. 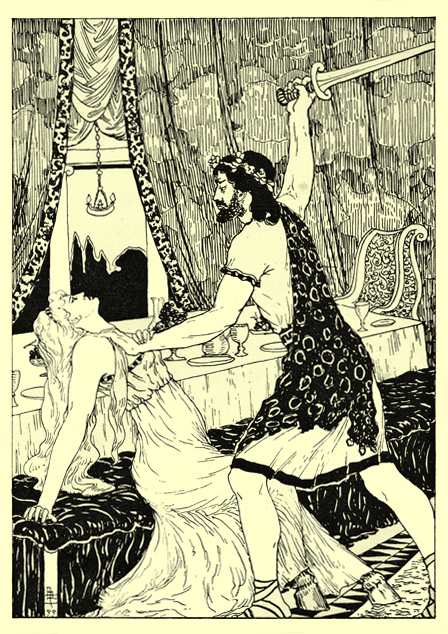 
151
ADVENTURE
WITH THE
DONKEY-LEGS.but the hoofs of a donkey. In an instant I drew my sword, seized her, and, having securely bound her, questioned her in detail. She informed me — reluctantly, it is true — that they were women of the sea, called Donkey-Legs, and lived on passing strangers. “When,” she added, “we have made them drunk, we attack them in their sleep.” Hearing this, I left her bound, and going up on the roof, summoned my comrades with a loud shout. When they were assembled, I revealed the whole truth to them, and pointed out the bones and led them to my prisoner, who immediately turned into water and vanished. Drawing my sword, I plunged it into the water to see what would happen, and it became blood. Thereupon we lost no time in getting on board and sailing away.

When day began to dawn we descried land, and guessed it to be none other than the continent on the other side of the world to ours.

After solemn worship and prayer we took counsel together about our future course. Some wished merely to embark and sail back again, whilst others were for leaving the ship and going inland to discover the nature of the inhabitants. In the midst of our deliberations a terrible storm burst upon us, driving the ship ashore and breaking it up. We with difficulty swam to land, each of us grasping his weapons and anything else on which he could lay hand.

Such were the adventures that we experienced up to the time we reached the Antipodes — on sea, among the islands, in the air, SHIPWRECK.153 in the whale’s belly, with the Heroes and the Dreams, and lastly among the Ox-Heads and Donkey-Legs.

My travels on land I will describe in the succeeding volumes. 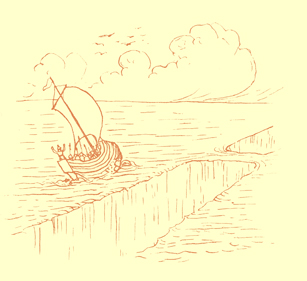 1  The Minotaur was an ox-headed, man-eating monster, who lived in the Labyrinth in Crete. He was slain by Theseus with the help of Ariadne.